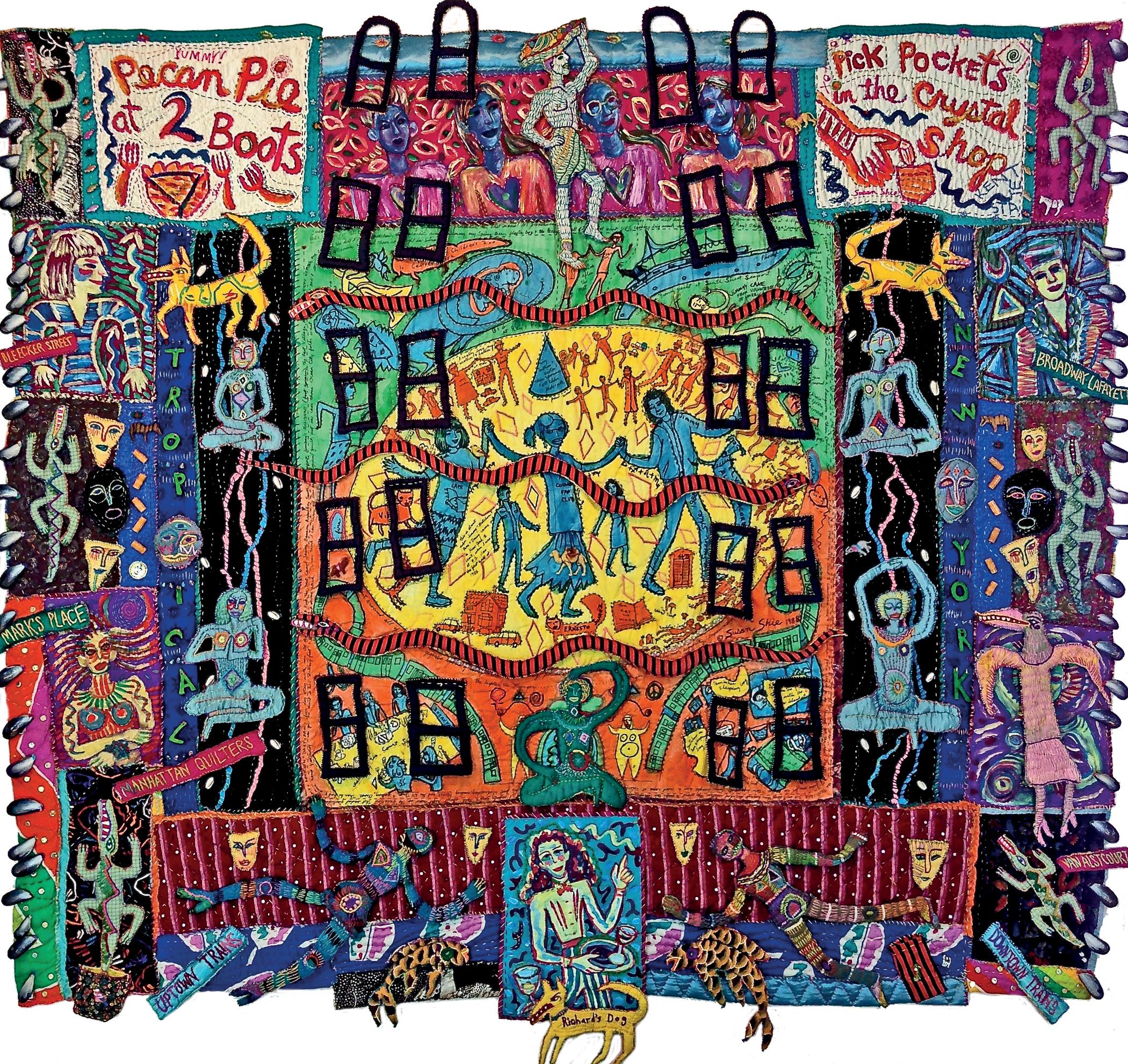 This is one of three major pieces I made when I was living in New York City in 1988, doing an artist's residency through the Ohio Arts Council. At that time, I'd been making art quilts for about ten years. I had a studio at PS#1 in Long Island City and had an apartment three blocks away. When my family came to visit me over my daughter's Spring Break from her junior year in high school, I later made this piece about her and her two best friends, and Jimmy, who came out with three wild girls, to see me. Every part of this piece is hand sewn, and I did a lot of painting on fabrics I got from an agency in the basement of PS#1, Materials for the Arts. The figures are mostly 3D painted and stitched, but some are only painted on cloth and stitched. I was pretty feisty about using unusual materials back then and included mussel shells from a fancy dinner we had with my old grad school advisor, Joan Gardner, and her husband Frank, as they also lived in NYC.

Adventures in this piece include Jimmy spraining his ankle at the South Street Seaport, during that visit, and me buying him a cane (that we still have) at the Volunteers of America, across the street from my studio, where I was a frequent shopper, finding interesting things to sew into my art there. The snakes on the piece stand for the subways, and the windows are those of my apartment building, between the C-Town grocery store and the Korean Deli on the corner. One of the smaller sewn-in images in this piece is my experience of being in a crystal shop when the owner caught someone stealing gems. I was terrified and couldn't even look behind me to see the interaction. But I got a good art story out of it. The aqua-colored buddha girls here represent a class I took at PS#1, studying Yoga Voice with the wife of the artist from the Netherlands. There were about 35 artists in our program from PS#1, from all over the world, including five states: Ohio, Minnesota, New Jersey, Washington, and New York. My best friend there was the artist from Japan, a woman named Hirrarin Hirabayashi.

While I was living in New York, I became great friends with quilt artist Robin Schwalb, and became an honorary member of Manhattan Quilters, and later of Art Quilt Network New York, which Jimmy and I would attend meetings of for years after. I love New York, and this piece celebrates Springtime there when the apartment windows were finally flung open, and I could hear the parrot who lived far above me, calling her own name: "Buffy!" The alligators are for the notorious gators in the sewers in NY, and the dog at the bottom of the piece belonged to an artist at PS#1 named Richard. I miss that adventure, when I was only 37 years old, way before personal computers and iPhones, when I had only my subway and street maps to find my way around that massive city!
Materials
Commercial fabrics, hand-painted whole cloth panels, embroidery thread, various objects (sides have mussel shells attached).
Techniques
Hand painted and sewn, stuffed