It is always an honor to be asked to review work by textile artists and I would like to thank SAQA for the privilege. The jurying process is one of excitement and anticipation when artworks are seen for the first time. However, I had not expected to be so stirred by the stories that were unveiled from past and present, some well known, others deeply personal. To select only 36 out of 191 pieces was hard, and I had to make some tough decisions. Had numbers permitted, I could easily have selected many more. The subject for the exhibition, “Forced to Flee,” obviously resonated deeply with SAQA’s membership, and submissions from non-American members were higher than usual.

The high standard of the works and their content, combined with the artists’ statements, have been so thought-provoking that many of the images have stayed in my mind long after the selection process ended. Overall, I found the attempts at abstraction less successful, something that is possibly not surprising with such an emotive subject matter. I am aware that figurative and representational works dominate in the final selections, but many are multi-layered, revealing more of their stories on closer inspection. Text in different forms has played an important part in many works, whether stencilled or appliquéd harsh single words, storytelling in cursive script, lists, or printed mementos.

Art quilts have long challenged the notion that quilting is a comfortable art form, and SAQA artists have not shied away from tackling difficult issues from around the world. Interpretation of the theme was varied, ranging from the horrors inflicted on the Jews during the twentieth century and the current dreadful human conflict experienced in many countries such as Syria, to environmental issues brought about through global warming. The common link is the sense of anger at the injustices served on those who have been displaced. The artists have expressed these feelings using gestural mark making and stitching to create haunting faces, ghostly figures, chaotic backgrounds, and stark surroundings.

The huge numbers of people involved have also influenced the artists and are referred to in many statements; the number of refugees, and the number of people who have gone missing or who have been killed or died. These people have been represented in a variety of ways from impersonal lists at one extreme, to beautifully executed soulful faces at the other. To convey an idea of the vast numbers involved, people have been depicted as abstract forms in endless columns, as shadowy outlines, and as matchstick figures fleeing across a barren land.

The image of Aylan Kurdi, the three-year-old Syrian boy who drowned in 2015 in the Mediterranean Sea, went viral, demonstrating the power of the internet in spreading awareness of global problems. Elizabeth Michellod-Dutheil’s Diaspora is a moving composition based on that image, all the more poignant for its simplicity and use of scale; one small boy in a vast landscape.

Other images may be familiar, too, such as the inadequate boats overladen with refugees on rough seas, or the haunting photographs taken during the Khmer Rouge regime in Cambodia. Using textiles as the prime medium in their works, the artists have been able to add further layers of meaning. These are not pretty pieces. The contrast between the sense of physical comfort normally associated with textiles is at odds with the harsh imagery, creating visual tension. Close examination of some pieces reveals a recurring use of barbed wire, a literal, vicious physical barrier and also a visual metaphor. Stark silhouettes with jagged edges jump out of muted backgrounds, and explosions of fiery color disturb subdued palettes.

The artists have been sensitive in selecting techniques to form the expressive palettes that complement their subject matter. Loose threads, raw edge appliqué, distressing, and burning, as well as other surface decoration techniques such as stencilling, mark making, and photo, screen and breakdown printing, have been chosen and handled masterfully. Technique has not been allowed to dominate. Whether hand stitched, embroidered, or machine quilted, stitching has formed another important component, binding the works together both literally and metaphorically, as in No Fixed Address by Paula J. Swett. A further nod to quilting traditions can be seen with the loose block construction that underpins several pieces, such as in Wanted – A Home by Diane E. Wespiser.

The power of textiles to convey memory has long been recognized and is something to which textile artists seem particularly sensitive. In some of the works, the medium chosen has become part of the message. Material from lifejackets gathered on Lesvos, or remnants of clothing gathered from an abandoned camp, provide a tangible connection between the refugees, the artist, and viewers. Karin Täuber speaks of the scent of sweat, fear, and body fluids still emanating, despite washing, from the textiles she used in Life Jacket Graveyard of Lesvos. In Liberty Deconstructed/Reconstructed, Cathy Miranker uses construction site fencing as a physical barrier in her work, referencing the proposed wall between Mexico and the United States.

The most successful works are those where medium, message, and technique come together in cohesive and original compositions. Reviewing the works once again in order to compose this essay, I was moved to tears by many of the sorrowful stories in these powerful depictions. These works are accessible even if they can make uncomfortable viewing. Audiences will surely come away with images etched into their memories, and with more awareness of the tragic plight of large sections of humanity. 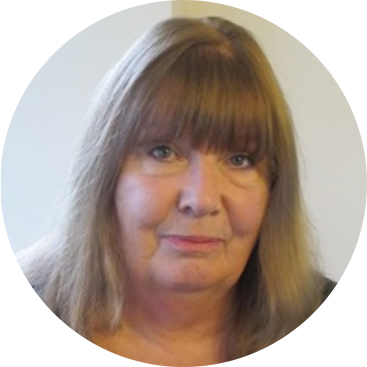 Dr. Susan Beryl Marks developed a strong interest in Art and Design History, earning her PhD in Art History from the University of Sunderland, United Kingdom, in 2006. Her  doctoral thesis explored these divisions by examining contemporary quiltmaking practices, which included a comparative study of historical developments in quiltmaking in the United Kingdom and the United States.

Additionally, she has authored numerous essays on a variety of quilt exhibits and quilt-related topics which have been published in exhibition catalogs and magazines. Dr. Marks is currently an Associate Fellow of the International Quilt Study Center.