Prayer for the Serpent Mound

Browse the Collection
Prayer for the Serpent Mound 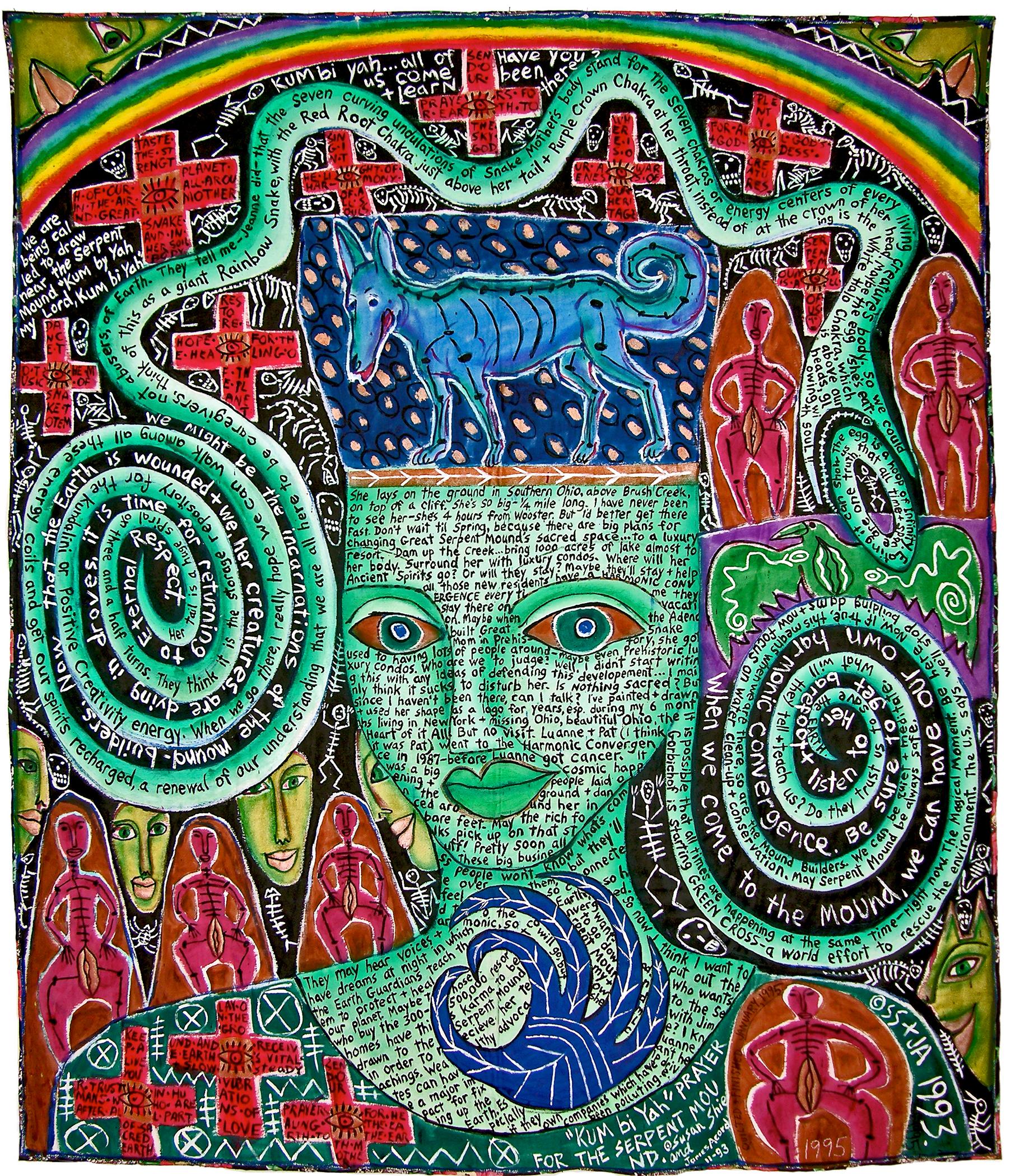 There was a man who wanted to turn the land around the Serpent Mound in southwest Ohio into a recreational community of expensive, gated homes, and to dam up Brush Creek, the stream that flows below the bluff near this sacred and mysterious prehistoric Native American effigy mound. I had used the Serpent Mound's image as part of my signature when I lived in New York, and signed myself there sometimes as Ms Ohio. The mound is over 1.25 miles long, was made by the Adena Indians, and no one knows why, because this is not a burial mound. I almost got to go to it once, when hippies went there from all over, to celebrate the Harmonic Convergence, a planetary lineup that was to usher in the Age of Art Quilts Unfoldingarius or something like that. I didn't get to go, but I remain a devotee of the Serpent Mound. And by the way, the guy's plans finally got stopped, but Ohio's Soil and Water Department, who refused to let him dam up the creek.

But before that happened, I made this painting on canvas, about my worries that the fancy community of rich vacationers would wreck the peace and quiet of the Serpent Mound's space. I put the canvas up on the wall, and stared at the great expanse of white cloth. I didn't like any of the sketches I'd made for this image, so when I distinctly saw a woman's face made by the shadows on the cloth, I decided that she was the Spirit of the Serpent Mound. I grabbed my brushes and painted in her shape, and then I created the rest of the forms in this piece around her.

I made lots of white skeletal animals on a black background around the mound, as the spirits who live there in peace. I painted red crosses for saving the Serpent Mound, from that crazy guy who wanted to change it so much. I made guardian women in red, the Native Women whose spirits must live there still. I put a hat on the big green woman's head, and made up a wolf constellation on the hat. Wolf is the Teacher in Native stories, and I wanted us to all learn from the Serpent Mound. Learn Peace and connection to the Earth.

I drew a hand on the women's neck, because they have forms in this unusual shape from the prehistoric people who built the Serpent Mound. I put a rainbow across the sky, as the promise that it would all work out. And it did.

Two years after I made this painting, I was asked for a protest quilt for a show up at the New England Quilt Museum (I think!), and I really didn't want to quilt this big canvas. But my husband Jimmy bravely volunteered to machine quilt it for me, if I would sandwich the layers and baste it. He had never quilted a piece before, and after that, he never did again! What a job! So the copyright got extended to 1995, and the piece went to the show. And I still haven't been to the Serpent Mound, but it's still there, lying on the east in peace.

I chose to offer this piece for my 1990s decade piece, because it's a link between my art quilts that were all hand sewn and embellished (and then I'd sew a bunch of small things together to make one large thing usually, like "Tropical New York.") and my art quilts that I make now, which are whole cloth painted and mostly machine sewn. I didn't stop hand sewing my pieces until the mid 2000s, so this was a glimpse into where I'd go much later. Oh, and the quilts I've made since 2004 have never been on canvas! I use a koan-weight cotton from Test Fabrics most often now.

Another thought about this piece is that I did all the line drawing and writing with a paint brush, which is hard to do on canvas. Up until 2003, I usually drew and wrote with a Rub-a- Dub laundry marker and then hand embroidered over my lines. Sometimes Jimmy did a little machine sewing over my writing. And on this piece I got him to do the green shading on the Spirit Woman, with his airbrush, over my hand painted piece. But we about killed each other over our efforts to communicate how to do it, so this piece was the watershed, when I realized I needed to learn to airbrush myself. For years now I have airbrushed all my large art quilts. This piece is very important to me, in many ways.
Materials
Whole cloth painter's canvas, fabric paint, batting, backing fabric chintz cotton.
Techniques
Hand painting, a little airbrush painting, mostly machine quilted.