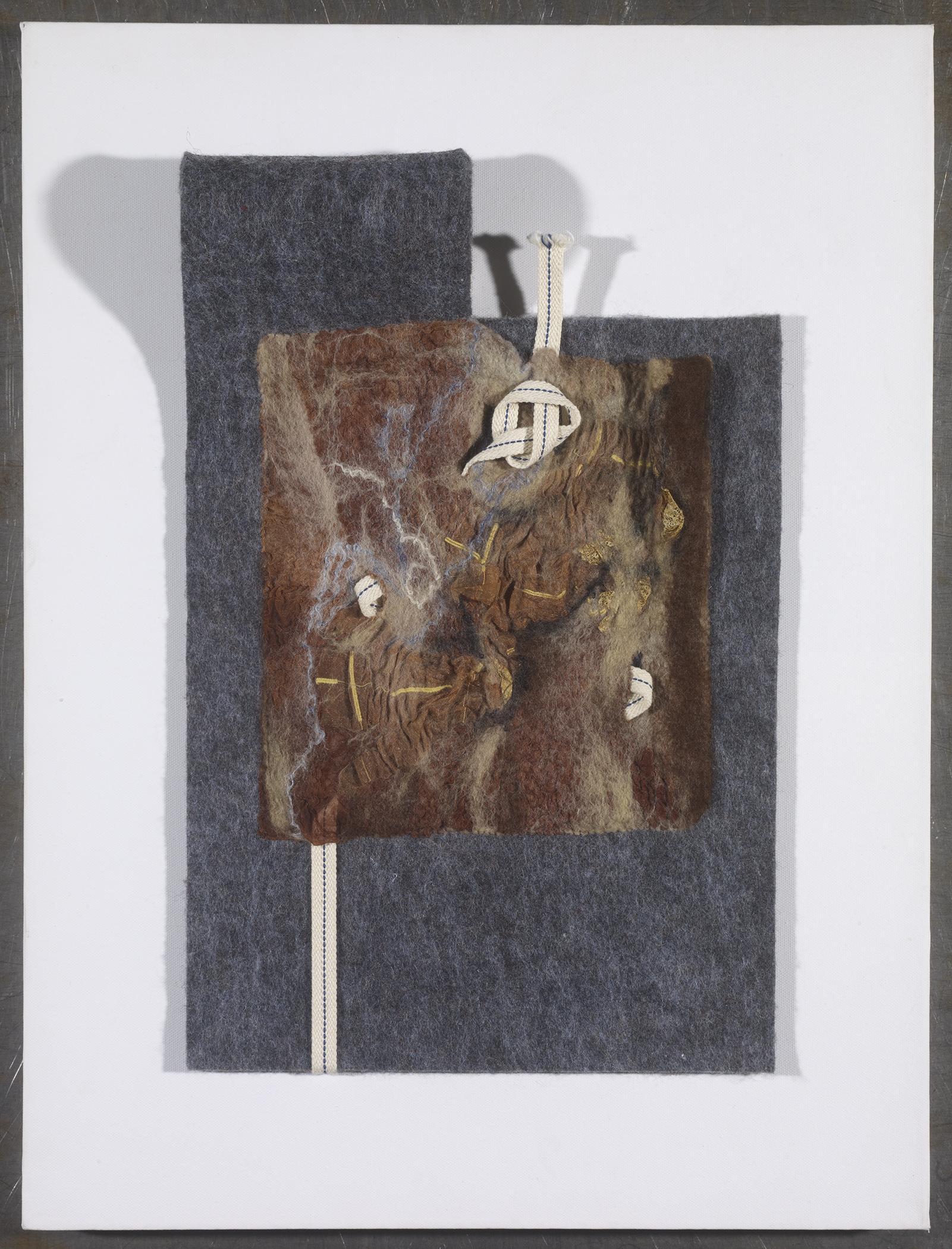 An unseen, an empty space yearns to become visible as beholding all that had been cut-off, discarded and ignored as non-existent. Yet, here it is, beholding Veritas, an inconvenient truth of all ages past, present and future.

By shedding light from two vantage points, one can begin to see more than sharp cut-off lines.

By extending the viewing frame of this fiber work beyond the borders of the cloth, the entire composition becomes interactive and multi-faceted. A viewer may glean new ideas when shadows are incorporated to reveal other dimensions of the central fiber piece, when a white plane of the stretched canvas is included to allow shadows to be seen, and finally, when cropping the picture, a black border is added to complete the subject matter.

An idea to illustrate a nebulous empty space concept came to me in a flesh of frustration during my oral argument with a young Czech lawyer in Prague. In 2009, I hired the law firm she worked for to argue our family case of orphans (and their descendants) who got no distribution from their inheritance since 1949.

In 2010, this second lawyer working on our case presented to me a seemingly plausible argument that we had no case, because a plot of contested farmland was returned to the family after the communist regime changed in 1989. I ripped off a page from my yellow U.S. legal pad. Then, I tore off a corner of the page. When viewing this piece of paper with something missing, her verbose legal mind began to turn. Indeed, we had a case of just legal demands. Not merely to damages for all years of waiting for a portion of still laying and not disbursed inheritance, i.e., the real property recorded as owned by the dead soul of orphans' grandmother. In simple terms, we had a right to ask for justice, for the Czech courts to undo harm, to make whole and to restore what defenseless orphans were entitled to and never got; and to what remains to heal such kind of injustice:

To restore basic dignity to those who had died and had been cut-off from the land of living, as if they had never lived.
~~~~~~

The narrative of the story begins in a tape hidden underneath the upper left corner roll of a gray, industrial felt. Traveling on a reverse side of this background, the story line is pulled up forward. After more than 50 years, the story of four orphans emerges in the left bottom corner. Ignored again, nevertheless, in 2002 orphans enter into a new drama between the dead and the living on a brown fertile legal field of a newly discovered farmland that belonged to their grandmother, deceased since 1949.

In 2016, remaining descendants of three such orphans are still waiting for justice and their share of this land. The truth of their family story and the judicial conundrum attached to their legal case lies in a cut-off empty space, as if their ancestors' basic human rights had never existed.
Materials
Silk organza dyed on onionskins,unspun merino wool and wool yarns, commercially embroidered novelty fabrics, gold dyed silk cocoons, industrial gray felt,white primed stretched canvas
Techniques
A brown field is nuno-felted with merino wool and novelty yarns, topped and collaged with sheer and embroidered commercial novelty fabrics, and worked on a silk organza that was hand-dyed in onionskins by artist. The nuno background was slashed to pull up and to reveal the story. Author purchased a woven ecru tape with blue dash lines in the Czech Republic.

The under layer of a gray industrial felt was used to contrast two fields (planes) in which the story unfolds. One plane, that of a gray communist era, with its industrial en-masse and unfeeling ideology towards individuals' personal property and human rights, as carried on by judicial systems of that era, and the other plane, a brown fertile land that is alive, that produces crops and survives, no matter who is in charge of justice in the land.

All layers were mounted on a white primed stretched canvas, to denote purity of truth and justice ideals, to offset the colors, and to reflect the texture and dimensionality of subject.

A black border was added while cropping the picture, in collaboration with Mr. Joe McDonald, professional photographer of Digital Grange Fine Art Services, of Petaluma, California. It fits the theme of extending the fiber work beyond the borders of the cloth, by incorporating shadows created by dual lighting that exposed other dimensionality of the whole fiber piece.

The traditional black border on a white paper is used on notices when a loved one dies, and those are still commonly printed in the Czech Republic and sent to relatives and friends.