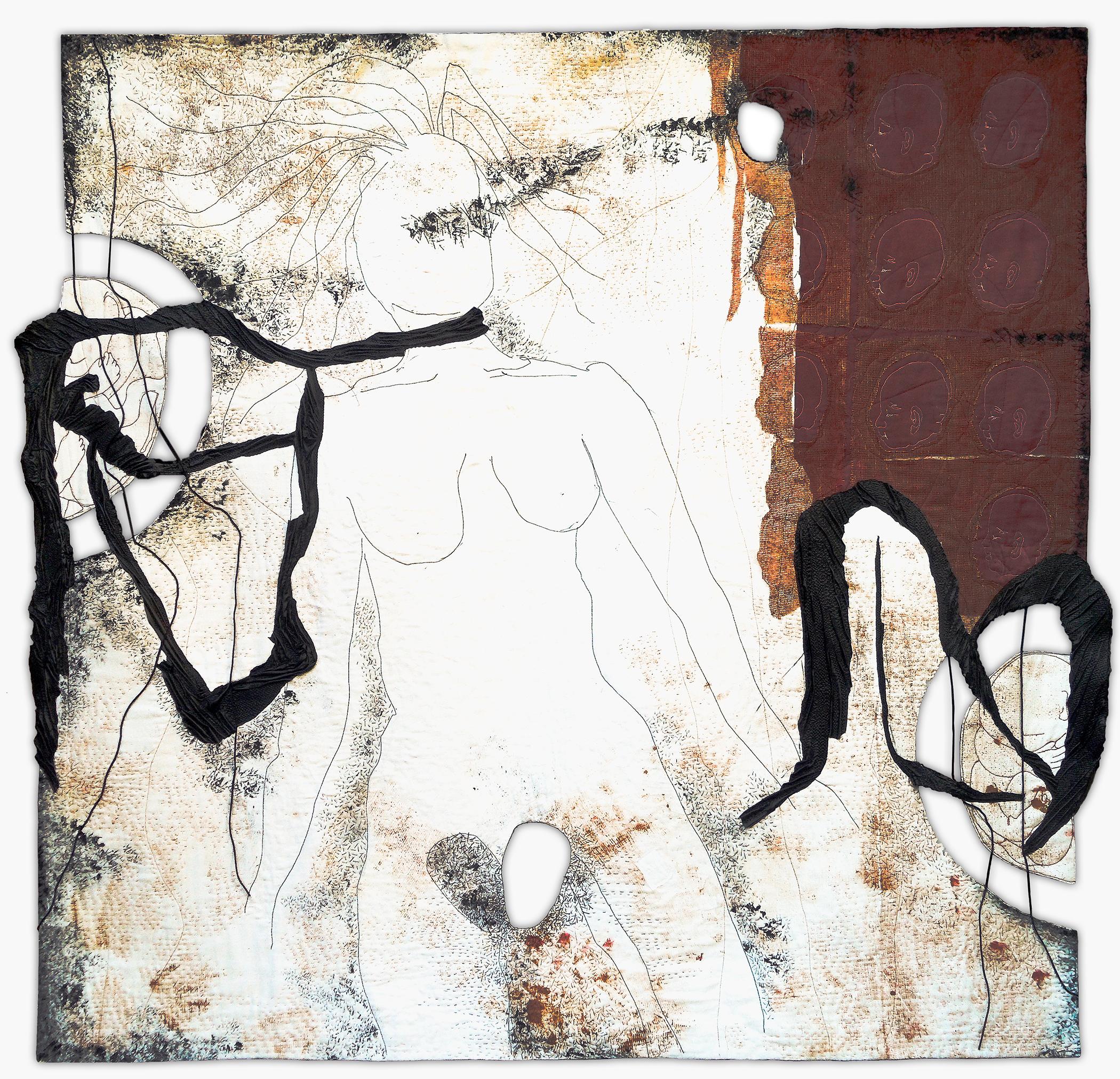 Brigitte Kopp is a textile artist with own studio,living in a small village south of Berlin in Germany. Coming from the visual arts she came in contact with textile art in 2008. She found it the ideal combination for her art as she had always a preference for collages and textile. Since her third quilt "Alzheimer's" was accepted for the fourth European Quilt Triennial in Heidelberg, her can be found in many international exhibitions and Museum such as Quilt National, Fibre Art International or European Art Quilt.
Her dynamic textile collages have won major awards including the prestigious 2014 "Fine Art Quilt Master" in Birmingham and the first prize of 25th anniversary contest "The Gala of the Unexpected" 2016 of the National Quilt Museum in Paducah (USA).

Her work should not only be beautiful or nice or pretty and cute. The subject is the driving force for her pictorial language and determines the technique, colours and structures she will use. Brigitte Kopp works in series based on different themes. She dedicates herself as an observer of her environment. In the last years most of her textile collages where based on social themes, on people, their environments and their relations, to show the invisible connections we become aware of only upon reflection.

She names art as her commentary on the world, on our environment, and on how humans interact with one another; partly as a critique against the negative political and social decisions that has affected the environment, but also to re-inscribe a personal language onto highly political and remaindered sites. She is not looking to impart messages in her work, but does want to draw out the emotions of the viewers, as they are encouraged to look closely to her work. Many titles of her works seams to be unfinished; she prefers her work to be open to interpretation hoping it provokes thinking about the theme, whilst being wary of something being read into a piece that is not there.

Brigitte Kopp transforms her themes in textile or mixed media wall hangings and objects between abstraction and realism that can be called conceptual art.

The works, composed as they are of multi layers or even fragments are more based on drawings and collages than on painting. She uses thread to draw, fabric to add background and colour to express emotion. She likes to make a combination of sketching with her domestic sewing machine and hand quilting or embroidery on layered self-dyed or painted fabrics.
She also likes to play with the form of her work. You can find cut outs or protruding parts as in "About a Couple II", or even free hanging parts only fastened with some threads as in "Geb�rm�tter" (Wombs). Other pieces are no more squares often showing a special shape as a woman's body in "And God created women".

Very special are the stripes of delicate draped and embroidered latex material she uses, which often reminds to the skin of a snake, an association she loves to play with.

The layering and partial veiling of information, the signs create impressive works, in which one can delve into for a long time.

This pieces belongs to a series on women's roles

There are many different ways in which our society perceives women, depending on their roles or the roles that people allocate to them.

One is having children. "Geb�rm�tter" (Wombs) designates both the organ as well as the women who are having more and more children. This piece focuses on the struggles women have making decisions about contraception and abortion versus having a lot of children.
It is the winner piece of the Fine Art Quilt Masters 2014, Birmingham, UK.
Materials
recycled cotton bed cloth, net, latex, ropes,
Techniques
painted whole cloth with applications, hand and machine quilted and embroidered