American Pie : 6 of Potholders (coins) in the Kitchen Tarot

Browse the Collection
American Pie : 6 of Potholders (coins) in the Kitchen Tarot 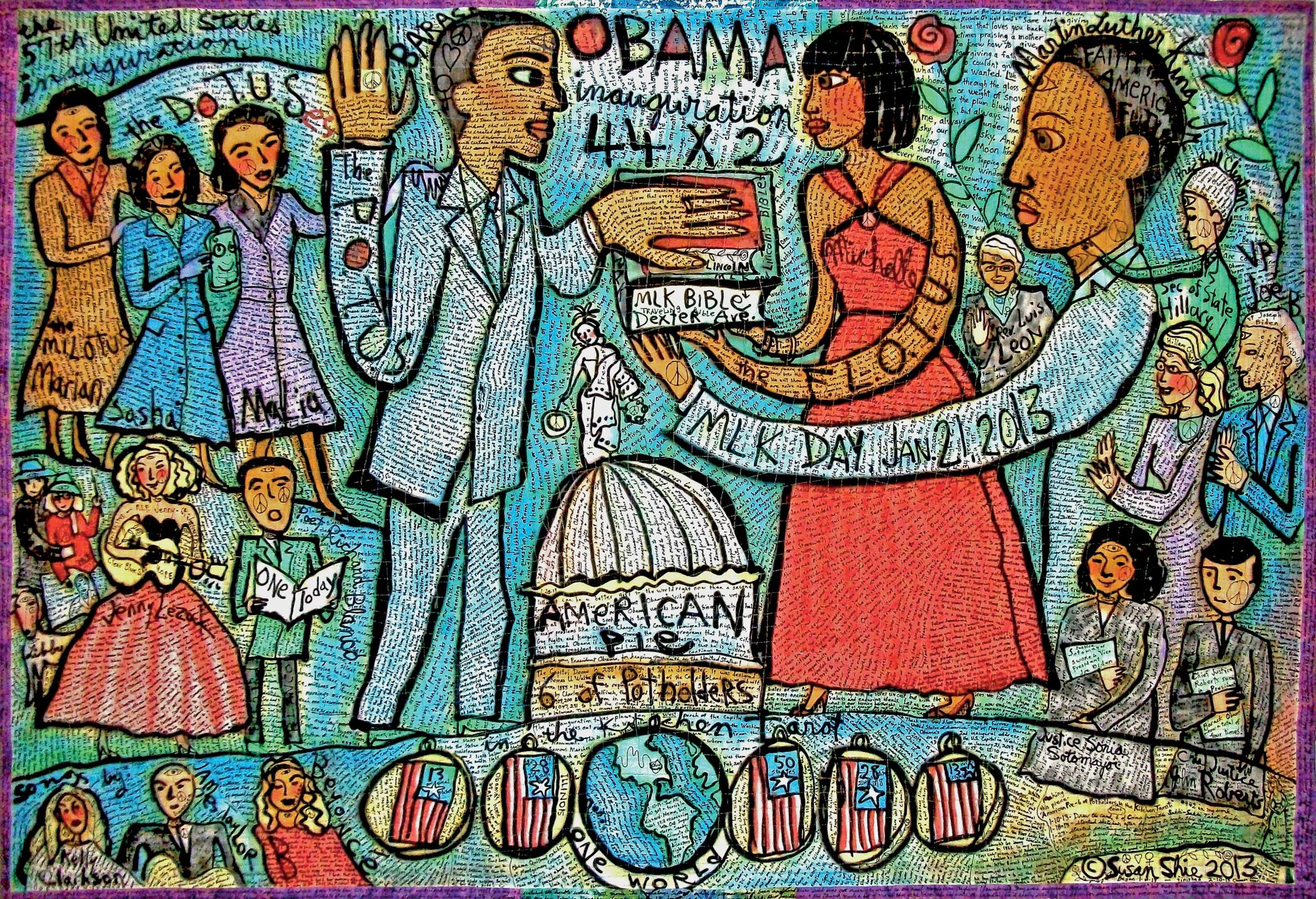 When President Obama won his second term as the 44th president, I knew I wanted to document his second inauguration. I made a lot of sketches, and I got the idea to call the piece American PIe. I drew Barack and Michelle holding a pie, but that didn't really thrill me. Then one day I realized that the big dome on the Capitol Building looks kinda like a big meringue pie's top, so I started sketching the Capitol into the composition. I had to research the statue on top of that dome, and discovered the amazingly beautiful Statue of Freedom! I watched the whole inauguration and fine-tuned my sketches.

When I'm ready to airbrush, with the big piece of cloth pinned up on the bigger wall, I don't let myself look at my sketches, except to remember what goes where, and what the people are doing, what props they have, their postures, etc. I don't want to copy from the sketches, because I want to let the drawing come out of me naturally, with my airbrush doing the magic, and me kind of hovering over the painting, feeling like a hummingbird!

After drawing the piece freehand with black airbrush paint, like I always do now, I headset the lines, and put the fabric back on the wall, to color with my airbrush. You just hold the airbrush farther back than you do, when you're drawing with it. The actual painting only takes a couple or three days, and that's my favorite part of making my art quilts!!! It just thrills me to see that huge image come to life, from a blank and gigantic piece of cloth on the wall!!!

After I again headset the painting, with the colors on it now, then the painting is ready for the many weeks' long process of writing on it with my airpen and black fabric paint. In this case my research for writing was all about the inauguration. I put President Obama's inaugural speech on my iPad and started to copy it onto the cloth. I also put lots of stories of other things that were happening in the world and in my own life into this piece, but that speech and the Inaugural Poem took a LOT of the space!

When I decided to write the Inaugural Poem that Richard Blanco had written and read that day, onto the background of the piece, I had no idea how far it would go in taking up the spaces there. When I got to the part where he wrote about the light that puts color on the faces of bronze statues, I got chills, because that came exactly where the face of the big Statue of Freedom was in my painting. There is no way I could have planned that placement of the poem's reference to her face to line up with her face! I got chills and ran to tell Jimmy about it. He wasn't impressed, so I went back to my writing! :)

Another thing that was very wild in preparing for this painting, was that I wasn't able to find Michelle's inaugural gown online until after she wore it that night, debuting it at the first ball they attended. I thought the cut of it would be easy to draw, but was very shocked when I saw that it was bright red! I knew that was going to put a LOT of bright red into my painting, so I decided to use a red, white, and blue color plan, and embrace the patriotic moment!

A flub happened when I only drew one Bible for Obama to swear on, and then later realized that he had TWO Bibles: the Lincoln Bible he swore on in 2009, and now the added Martin Luther King Jr Traveling Bible, since this inauguration fell on MLK Day. You can't erase those black airbrush lines, so I had to figure out how to draw more lines into the Bible, turning it into two Bibles. And then Jimmy said the red one was the MLK Bible, so I marked that. But that was wrong! I had to change the writing, using some of my foxy and highly clever ways of switching things around, mostly with arrows!

I put Jimmy and me and our dog Libby into the inaugural crowd, with me drawing, though we weren't there. I also put a friend of mine, who had just passed away into the audience, next to Richard Blanco. In her obituary, they used a photo of Jenny Lezak wearing a strapless dress and playing her guitar. I made her that way, looking all fancy for Obama's party.

On the right side, Martin Luther King is standing across from Obama, helping MIchelle hold up the Bibles. And behind King is Bill Clinton, who just wants to touch MLK, his hero. Below Clinton are Hillary and Joe Biden, then two Supreme Court justices: John Roberts and Sonya Sotomayor. I got carried away and started adding people to the empty spaces left, trying to include everyone who had a part that day. Senator Schemer is on the back of the piece, because he wouldn't fit on the front, but had been in charge of the whole day's events, so he deserved to be there, too!

On the left side I put the Obama girls and their grandmother. Sasha is holding her iPhone with the Frog or Turtle case on it. My granddaughter Eva suggested I write about the part where Sasha yawned, during her dad's speech, so I found that in a video and marked the spot on the speech, with her yawn.

There were five huge American flags hanging down from the Capitol walls that day, and I needed to show six, not five, potholders, to get this to be the Tarot Card I'd chosen to work with. So I added a big globe, the Earth herself, to the show! She and five American Flags became the 6 potholders of the card.

When I quilt, I have the whole piece pinned together like crazy, and first I sew around the edge, where the border comes over to the front from the back and tucks under the painting. Then I spend days and days machine sewing the body of the piece, where I've got gobs of bent safety pins holding everything aligned just right. I sew across from one side of the quilt to the other, then cut the thread and turn the piece to the right. I keep sewing all the way across, not using measured lines, but going along in any way I feel lie sewing. Gradually my "crazy grid" fills in. When all the safety pins are gone, I turn the piece over and sew from the back, where I can see my sewing rows much better. Eventually I get enough sewing in, and have listened to at least one audio book in the meantime!

I hand sew around the edges of my piece, using Laura Wasilowski's Artfabrik's hand dyed perle cotton thread. I love that time when I get to hand sew again. I quit doing all hand-sewn quilting in 2006, when my fingertips got numb from overdoing it, while I was my granddaughter's nanny for one and a half years. Once I quit doing all that sewing by hand, I was able to work much bigger, so I've never gone back!

I have come full circle, from the time at The College of Wooster, when I made my feminist choice to merge my studio painting with my home sewing, at the suggestion of feminist artist Miriam Schapiro, who was doing residencies at my school, and who became my penpal. What a rush it had been, to dare to make paintings which were also quilts! How very feisty of me, and of the rest of the young women who were making that decision on our own, all over the country, not knowing about each other. We were the start of the art quilt movement, we pioneers in putting art and quilts together. Old feminist hippies, we're still doing it!!!
Materials
Whole cloth painting with airbrush, small writing with airpen using fabric paint
Techniques
Machine sewn