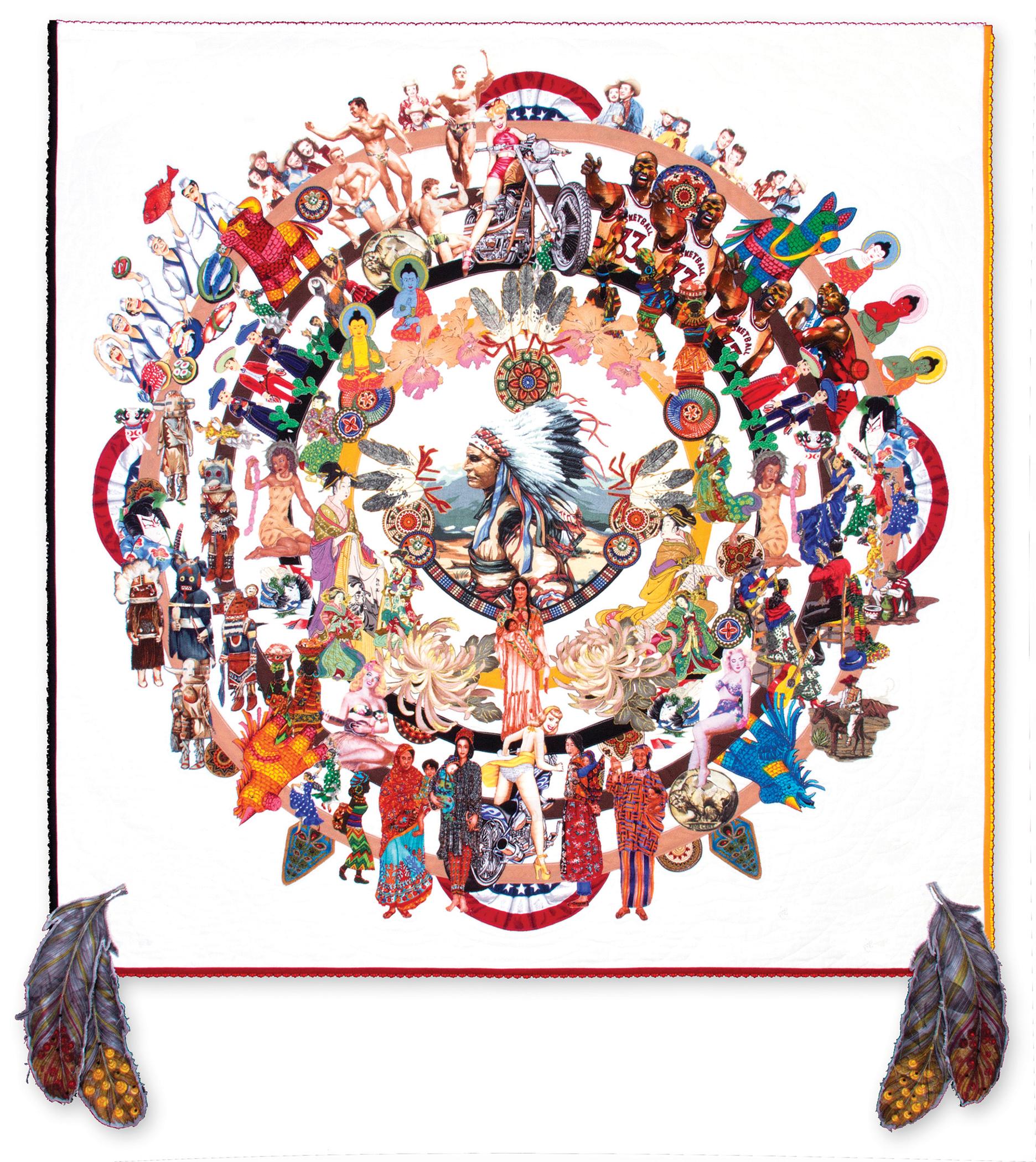 For more than a year (2004-5), I was manic about expanding the "stash" of fabrics I used in my art quilts. I visited at least 15 fabric stores in Colorado. During my search, I quickly became aware of racial stereotypes as presented in fabric, and I narrowed my quest for fabrics that featured humans.

As a Caucasian person, I saw that whites were portrayed as ski/snow/biker/beach babes, as Roy Rogers & Dale Evans, or as muscle-men. Often, people from other parts of the world were given white faces. Asian people were portrayed as cartoon sushi chefs and geishas. Black people were basketball players or faceless women carrying baskets. Hispanic/Latino people were Flamenco dancers and musicians, or they were taking a siesta under a tree. Native Americans were noble and elegant, dressed in full regalia or they were portrayed as caricatures. The most beautiful fabric I found was called "Mothers of the World," featuring fairly realistic renderings of women of color from diverse world cultures, holding their babies. I also found fabrics that offered iconic objects from various cultures: baskets, beads, chrysanthemums, and pi�atas.

I researched 2000 census figures regarding the percentages of racial groups in the United States, hence the use of the American flag. The white population was the largest, followed by Hispanic/Latino, Black, Asian/Polynesian, and Native American. Using binding that represented "flesh tones," I first sewed concentric circles onto my background fabric. Acknowledging that the United States is sometimes referred to as the "melting pot for all people," I decided to mix my fussy-cut fabric images to balance shapes, textures, and color palettes throughout the composition.

It is appropriate that one of the largest fabric images of a Native American became the centerpiece of the collage, placing First Nations at the core of our country. I bound and beaded the edges of the quilt using the colors that are traditionally found on the four sides of the Native American medicine wheel. I added quilted and beaded feathers to the two bottom corners.

This artwork, and the brief snapshot of fabrics collected over two years, is meant to reflect how people were portrayed stereotypically in commercial fabrics at that time. I enjoy finding multiple fabrics from which I can extract images, recontextualize them, and tell a new story.
Materials
Cotton quilting fabrics, beads
Techniques
Fussy-cut images from multiple sources; free-motion machine quilting; hand-sewn beaded border